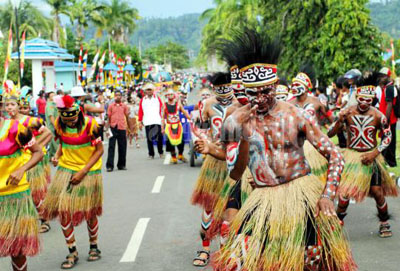 Indonesia is a rich country with tons of islands. One of the best islands is located in the easternmost of the nation, called West Papua. Apart from nature, it also offers a charming attraction like Yospan Dance. The fact is that it becomes a lure to attract tourists to come to West Papua Province. The locals perform it to get along well with each other and the dance is available both for male and female dancers. It is also often performed during special days and holidays. Mostly, it is available in the north part of the island.

The Nuance
The dance is performed in an open space. The dancers wear a unique costume with an exceptional hat. Almost all parts of their body are exposed, in fact. Back then, the costume featured mostly leaves. However, the locals develop it and use fabrics instead. The purpose is to make it more appealing for the audience and comfortable for the dancers. As for the ornaments, the dancers wear a necklace and apply tribal paintings to their body, representing Papua’s culture. No wonder, they look unique and attractive!

Enjoying Yospan Dance
It is true Yospan Dance becomes an attraction for tourists. However, the audience can also learn some history of it. According to the locals, the dance was formed by combining tow different dances such as Pancar and Yosim. No wonder, the moves are created and inspired by those dances. As the time went by, the locals develop those movements, which have more variations. Learning the history of the dance is fun, but enjoying the performance is more satisfying! Both domestic and foreign tourists won’t get bored of it, for sure.

Apart from the history, the function or essence of Yospan Dance is also worth learning. In a nutshell, the dance has one purpose, which is to entertain the audience. Some people also use the dance to commemorate special events and to greet important guests. In the local society, the dance becomes a symbol of social life, especially among teenagers. No wonder, the movements of the dance appear friendly and cheerful. For tourists, it would become a unique entertainment.

As mentioned before, Yospan Dance is performed by men and women. The number of dancers varies, depending on the preferences. That means it can be performed in bulk with lots of dancers. Next, there is an accompaniment, which is usually the local music. There is even a singer! Not to mention some musical instruments are included, such as bass, tifa, ukulele, and guitar. All of them combine into stunning entertainment, which mesmerizes all the audience.

How to Get There
For those coming from Jakarta, the first destination is Rendani Airport, which is located in West Papua Province. From there, they can directly take a taxi to reach nearby villages. As an alternative, they can take a bus from Manokwari Bus Station to the north part of West Papua Province, where the dance is often performed. There is a simpler option, actually. Tourists only need to take advantage of a tour agent instead of coming alone.