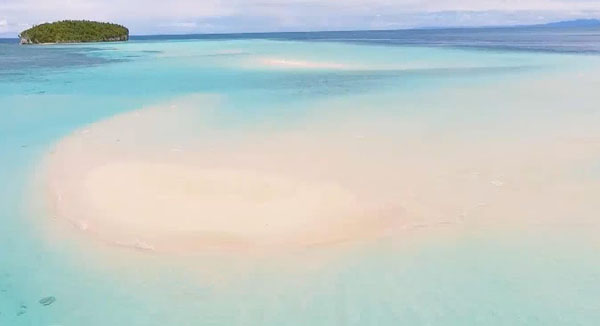 Most people recognize Raja Ampat as a beautiful archipelago. They also think mostly about Wayag Island, which is the most popular tourist spot there. However, more options are available, including Pasir Timbul Beach! The location is near to Waisai City and it belongs to Waigeo Island. Pasir means “sand” and Timbul means “appear”. As the name suggests, it is a small island consisting of mainly sand and only appears during the low tide. Thus, travelers should come at the right time to get onto the island.

The Nuance
As mentioned before, the island ha a small size and it consists of mainly sand. The color of the sand is white and there is no tree, growing on it. That means tourists can only see plain sand and blue seawater. The thing is the water is shallow, so people can swim in it comfortably. Even boats can get near to the island without hassles! Due to its uniqueness, travelers are intrigued, so they would definitely visit it when spending a holiday in Waigeo Island. During the high tide, the island disappears, though.

Exploring Pasir Timbul Beach
Pasir Timbul Island’s main attraction is indeed the beach, on which tourists can enjoy swimming and snorkeling. The shallow and calm water makes it possible for kids to play in the water. That means the beach is safe both for adults and children, regardless of the type of tourist activities they will do. Near to the beach, some small fishes swim beautifully. Some small corals are also seen there. It is because tourists can only enjoy those attractions in the water, as no animals live on Pasir Timbul Island.

With the size of about 100-150 m2, the island has only white sand and a stunning beach. No plants or animals are seen there. The only decorations are small shells, which are scattered near to the beach. The main scenery is the movements of the waves and the reflection of the sunray on the water. All of them are mesmerizing! This explains why visitors also come to the beach for photography. The serene atmosphere also becomes a good point in Pasir Timbul Beach, which is suitable for relaxation.

For swimmers, they have a vast and safe area to explore. Thanks to the calm and warm waves. Even kids are able to enjoy it, so parents can make the beach as a destination for a family outing. The combination of orange and blue sky color can be seen at dusk, which is astonishing. That means the beach is also suitable to witness either sunrise or sunset there. It depends on the time they are visiting the beach.

How to Get There
It is easy to reach Pasir Timbul Beach, especially for those living in West Papua Province. What about outsiders? For those coming from other provinces, an airplane becomes the best choice of transportation service and the destination is Waisai City. There is an airport, which is called Marinda. Once travelers get to the airport, they may continue the trip to the next destination, which is Waisai Port. From there, take a speedboat to Pasir Timbul Island, where the beach resides. It takes about 30 minutes. As mentioned before, the island is only visible during the low tide!