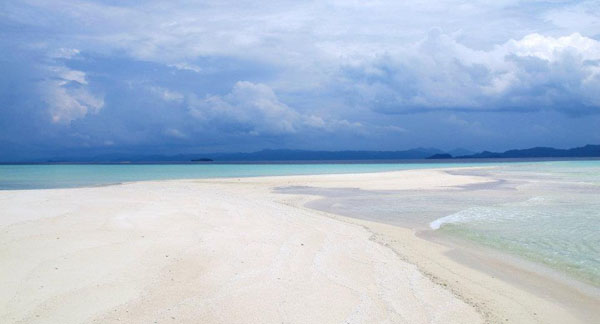 Travelers would think about Wayag Island when hearing Raja Ampat Regency. However, many other references are available to enjoy an unforgettable holiday. For instance, there is Roti Island. Roti means “bread”, as the shape of the island is similar to it. The locals also call it Koh Island, actually. This beautiful small island is well-known for its flawless beach, offering white sand and majestic sea. Most tourists come to that location for relaxation and swimming. Some of them also prefer sitting under the trees to water sports, though.

The Nuance
In terms of nuance, Koh Island is not quite big. The most crowded part is definitely the beach, as it features white sand and clear sea water. The waves are moderate, so it is safe for swimming and snorkeling. In the seashore, some boats are seen carrying passengers. It is possible to explore the island using such traditional transportation, after all. When it comes to the plants, coconut trees and other types of plants grow abundantly there. Many people are seen on the beach, especially during holidays. That means Roti Island is considered a popular tourist spot in Raja Ampat.

Exploring Roti Island
As mentioned before, the island is famous for its coastal area. Despite the small size, the beauty is undisputed. The breezy wind and lush trees even make it more comfortable for tourists. No wonder, some tourists perform photography and enjoy sightseeing there. The local keepers even allow visitors to eat some foods with families near to the beach, as long as taking care of the environment. That means Roti Island is also suitable for a picnic, especially with families. Nothing can beat a feast on the beach, after all.

Apart from that, tourists can witness some seagulls in the sea. These cute animals often approach visitors, asking for foods. Thus, it is better to carry some bread prior to visiting the beach. Some other wild animals also live there, including crabs and snakes. Not to mention some bats often come out from their nest in the dusk. Their size is big, and their appearance is creepy! Still, they won’t cause any harm to tourists. On the other hand, they can be a good object for photography.

Once enjoying good times in the beach, it is time to reach the nearby resort. Despite its traditional appearance, this becomes a recommended location for resting. Not to mention the location is quite strategic, which is near to the sea and surrounded by several trees. Some honeymooners often use the resort to spend their beautiful holiday, in fact. The guests can witness stunning see scenery and sunset from their room, as well. What a great experience!

How to Get There
The primary checkpoint is Waisai City, which is located on Waigeo Island. From Jakarta, travelers only need to come to Marinda Airport. Next, they need to come to Waisai Port and rent a speedboat to Roti Island. The voyage takes much time, though. That means tourists should have prepared some snacks and good stamina prior to heading to Koh Island.