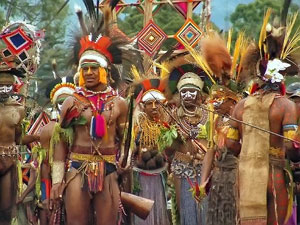 Raja Ampat area is officially located in Papua island, where there are numbers of uniqueness lay within, start from the natures to the ancient cultures and relics, in relation to the history of the origins and existence of the Raja Ampat society.

Among the society of Raja Ampat, there is traditional dance originating from a region that today is Kabare District, North Waigeo, which called as Bintaki Dance.

This dance started when a gentleman named Jober Maray, heard a group of people singing of Bintaki songs in the forest, the rhythmic voice is Biya Shell (shellfish) and the cheers of a group of people.

Mr. Jober then continue its efforts to catch fish with root mash Bore (a kind of poisonous plant roots) while enjoying the sounds he heard and joined the dance to the rhythm until the foam out of the root Bore, which used to poison fish in the Kali Kui. Currently, the Kali Kui has become a nickel mine operated by PT. Karunia Alam Waigeo.

Wor dance and song was first presented by Beser Biak tribe as one of the dances in the traditional party to welcome kings or lords who visited the villages in the Raja Ampat Islands.

As other areas in Indonesia, before Christianity entered to Raja Ampat, people at that era has its own way to bury their dead families. It happened in Wawiyai village, and now becomes the village tour while in discover the Raja Ampat.

In this area (Wawiyai) was found many objects that are considered sacred and historic, such as human bones, beds (tomb), dishes and other household utensils which are trusted by the community of Wawiyai village as bones of their ancestors. Those heritages are also intersting to be explored, in case of historical knowledge.

The Korowai And The Kombai

Korowai And Kombai People We are never acknowledge before that West Papua is more surprises than we expected, After Asmat people and The Dani, there are still any other tribe that we can review the uniqueness and the the way they are living among the society. Koroway and Kombai people, are the indigenous tribe who live in Southeastern Papua, Irian Jaya, Indonesia. They are different tribe, but they have similar way of living. Those tribes are living in the same way, which in up to the top of the trees.…