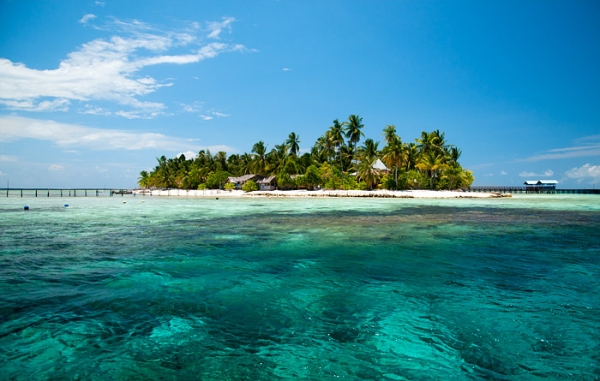 Raja Ampat Regency has a formation of beautiful islands. One of them is called Arborek, and it becomes a recommended vacation destination for both locals and foreigners. The charming sea and soothing white sand make it a perfect option for relaxation, after all. Apart from the nature beauty, Arborek is also famous for its local village (Kampung Wisata), offering interesting traditions and entertainment. That means visitors can enjoy both stunning landscape of the island and the local’s life. It is going to be a wonderful vacation experience for everyone, especially passionate travelers!

The Nuance
In the beach, tourists can see splendid sea scenery with its serene atmosphere. The waves are calm and the color of the sea is absorbing. The white sand also becomes a great feature of the beach, and it features soft texture as well. Near to the seashore, there is a small hut, providing a space for resting. Not to mention many coconut trees grow in that location, offering comfortable shades and refreshing coconut drinks. What about the local settlement? It appears quite traditional and simple. Tourists would be amazed at its local structures, for sure.

Exploring Arborek Island
Many fun activities are doable in Arborek, including beach walking, sightseeing, and snorkeling. It doesn’t have to be a tiring activity, as tourists can simply relax under the coconut trees and drink coconut water. From that location, they can see boats approaching the island and docking in the pier. Some tourists even go to such pier for fishing! Not only local visitors, some of the tourists come from other nations as well. These include Mexican, Australian, and much more. Thanks to the flawless beauty of Arborek Island, especially the beach.

Diving is also popular in Arborek Island. In fact, a legendary species lives in the nearby sea. It is a group of giant mantas, having the size of 4 meters. Due to the high risk, divers should have a license prior to exploring the sea. It is because those creatures are considered dangerous to beginners. Not to mention they need to dive up to 20 meters. Overall, only skilled divers are allowed to get near to giant mantas and explore the sea near to Arborek Island.

Tens of people live in Arborek Island and they are considered the locals. Most of them work as a fisherman and a tour guide. Due to their friendly personality, all tourists can easily approach and communicate with them. Also, some traditional structures are seen there. These include a hospital, schools, and local facilities. Eateries are available, so tourists can try some local foods wholeheartedly. At the end of the vacation, it is recommended to buy some souvenirs. The most popular one is Pari Hat, which is a signature souvenir of Arborek Island.

How to Get There
From Jakarta, travelers can take an airplane to Waisai City and the destination is Marinda Airport. From there, they need to take a local transportation service and head to Waisai Port. The next trip would involve a speedboat to Arborek Island.