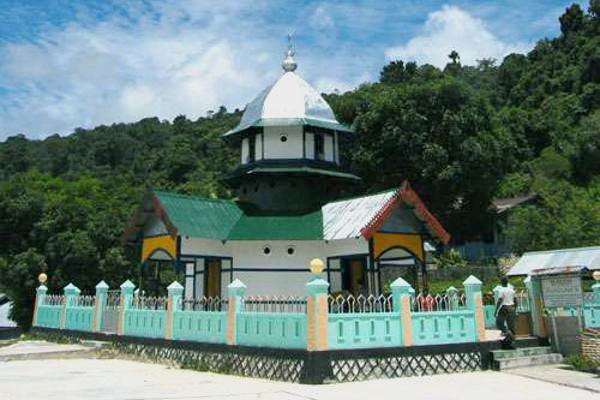 When it is about West Papua Province, people may think about Raja Ampat. However, it has other attractions as well. For example is an old and historical building, which is called Patimburak (Al-Yasin) Mosque. This majestic structure resides in Kokas District and belongs to Fakfak Regency. The fact is that it is a significant reminiscence of Islam culture in West Papua. Today, the mosque has become an interesting location for sightseeing and learning a bit history of it. In a nutshell, it becomes a lure for tourists who are visiting West Papua Province.

The Nuance
The shape of the mosque looks like a church with a dome in the midst of it. One thing that makes it quite attractive is the color. Patimburak Mosque combines different colors like green, light blue, white, red, and orange. Thus, emits a cheerful and happy aura, despite its old age. The size of the mosque is no more than 100 m2, so it can’t accommodate lots of visitors. Near to the mosque, there is a big mango tree. The size is quite enormous! So, what is inside? Tourists can see 4 primary pillars inside and the nuance is comfortable.

Exploring Patimburak Old Mosque
What can people do there? Mostly, tourists would find out the history of the mosque. They are interested in such story, after all. According to the locals, the mosque has been there for more than 200 years. Despite the age, the structure is still in a good condition. The history has it. The mosque was built in 1870 by Abuhari Kilian. Even though the size is not as big as other mosques, it offers a unique architecture design. Most visitors come to the mosque due to such reason, after all. They are impressed by its stunning design, combining local and Europe concept.

At a glance, the mosque looks like a Europe’s church. No wonder, photography becomes a significant tourist activity in the location. The locals are also seen and often tell tourists regarding the history of the mosque. It is said the structure has undergone several renovations due to numerous reasons, including the bombardment of Japanese Army. The fact is that there is the hole, formed by the blast of such bomb. The location is near to the mosque and tourists are allowed to observe it.

Like other mosques, Patimburak is used to perform praying by the locals. There are about 35 households living nearby, after all. For tourists, the mosque can be an object for photography or a spot to perform religious tourism. Being the oldest mosque in Fakfak Regency makes it more popular every day, in fact. Thus, no one should miss an opportunity to visit such historical structure of West Papua Province.

How to Get There
First, tourists need to head to Fak-fak Torea Airport. Once they get to the location, the next trip involves a local transportation service to Kokas for about 2 hours. Have no worries. The fresh atmosphere of the mountain may rejuvenate travelers. From Kokas, it is time to head to Patimburak Village by boat.