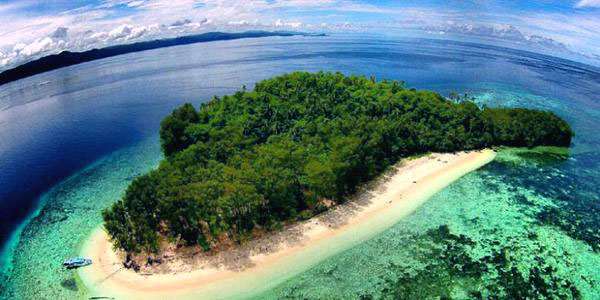 It has become common knowledge that Raja Ampat Regency is a suitable vacation destination for relaxation and enjoying nature. The reason is it features lots of island to explore, including Mios Kon. The locals often call this one the Bat Island. As the name suggests, tons of bats live in that island. Apart from bats, many birds are also seen there. Witnessing those creatures is indeed a prime activity to do in the island. However, many tourists come to the island to enjoy snorkeling and diving, as well. Thanks to vast option of diving spots.

The Nuance
In terms of size, Mios Kon Island is smaller than others. Still, it is quite popular among tourists. The shape of the island is similar to a heart. No wonder, the locals also call it “Pulau Cinta” (Love Island). The lush trees and serene atmosphere make it comfortable for visitors, after all. No wonder, many bats and birds live there. When it comes to the sea, it is clear and calm. The color is beautiful and it becomes the home of lots of fish species. Some majestic corals are also scattered underwater. They become primary objects to see during diving! On top of that, the sea current is not quite strong. That means everyone can safely explore the sea.

Exploring Mios Kon Island
Despite the secluded location, the island holds tons of beauty, especially the nautical views. Foreigners even consider it as one of the best diving spot in the world. The island is surrounded by a formation of corals, so it is suitable for either snorkeling or diving. Not to mention colorful fishes live there. The only issue is related to the facilities, as no local services are available. That means visitors should have prepared their gear beforehand, so they won’t get troubled later.

The next activity is definitely witnessing local creatures, including bats and birds. For those who want to see the bats, there are some caves to explore. Some of them also live in the tree, though. They sleep at noon and go for hunting at night. Either way, tourists can see those animals wholeheartedly. It is also possible to take some pictures of those bats! As an alternative, local birds are also worth a shot. They are both active and beautiful. Some of them often visit the beach, too!

Another popular tourist activity in Mios Kon Island is relaxation. The serene beach mesmerizes everyone and it helps visitors to get rid of their stresses. Also, beach walking is quite recommended, as the sand has soft texture and stunning color. Not to mention the wind is quite rejuvenating. With all these features, the Bat or Love Island becomes everyone’s choice when exploring Raja Ampat Regency. It is undisputed.

How to Get There
Travelers have some options in reaching Mios Kon Island, but the primary destination is Sorong City. From Jakarta, take an airplane to Eduard Airport. From there, the next trip is to Sorong Port and takes a speedboat to the last destination, which is Bat Island.

Where to Stay
Available hotels are in Sorong City