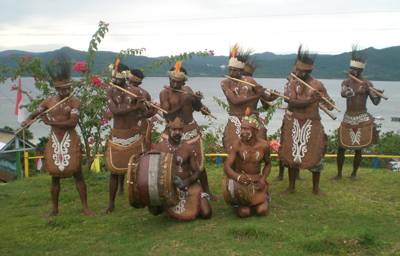 Apart from being the source of natural attractions, Raja Ampat Regency is also famous for its culture and arts. A unique entertaining performance is available there, which is called Suling Tambur. It is actually a traditional dance and performed to commemorate the local’s birthday. It is done by a group of people, especially those who belong to Biak Tribe. Suling means “flutes” and Tambur means “Drums”. As the name suggests, the performers may use those musical instruments during the concert. It sounds melodic and beautiful.

The Nuance
Suling Tambur is performed in an open space, which is near to the sea. Some men gather and perform it beautifully on the grass field. Most of them carry a flute and stand behind the drum players. There are two people playing drums, sitting in front of the flute players. They wear traditional attires of Raja Ampat, as well. The performance takes several minutes, and it sounds melodious. Sometimes, the music appears quite sad and serene. During the performance, it is likely the audience get mesmerized too. What a wondrous attraction!

More about Suling Tambur Attraction
The performance has a valuable history, which is related to famous missionaries (Geissler and Ottow). They came from Busami Tribe and lived on Yapen Island. At the time, they wanted to unite several tribes using an art. Suling Tambur was chosen as such medium, as it could help them deliver some prayers through music. This history becomes another reason why tourists are attracted to such attraction. They can learn it from either the locals or a tour guide, actually. It even attracts some historians and researchers!

The next feature that attracts tourists is the musical instruments. Several flutes and drums are used during the performance. These are made of bamboo and their size is various. The flutes have the length, which is no more than 70 cm. The number of holes varies, as well. The fact is that not all players are able to make such flutes. Only experienced players and the elders have the skills to turn a bamboo into a beautiful flute.

Being a popular traditional performance in Raja Ampat, Suling Tambur has become a common tradition in several parts of West Papua Province. Waigeo Island is not an exception. Thus, tourists should never miss the chance to witness such performance when visiting Waigeo. In this case, the best time to enjoy the performance is during important holidays such as New Year, local’s wedding, Christmas, etc. At the time, several people play the instruments and the others perform the simple dance. What a stunning tradition!

How to Get There
Suling Tambur Attraction is often performed in Waigeo Island. From Jakarta, it takes about several hours to reach Marinda Airport in Waisai City. From there, tourists only need to visit a nearby village. Some villagers may tell them regarding the schedule of the performance, actually. Therefore, it is better to learn about the agenda prior to visiting Waigeo. A tour agent may help the clients regarding the matter, after all.