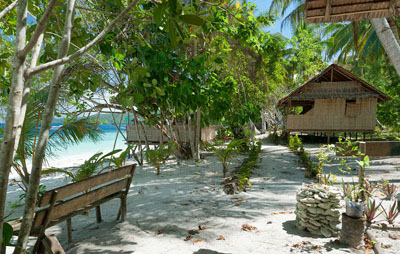 Batanta Island is part of Raja Ampat Archipelago and it is considered one of the biggest islands in such region. In that majestic island, a secluded village resides and the name is Yenanas. Apart from its serene nuance, the settlement is famous for its homestay. This explains why tourists keep coming to the location to spend a comfortable holiday. Some people even choose the village as their honeymoon destination. With lush trees and a wondrous landscape, no one can deny the beauty of Yenanas.

The Nuance
As mentioned before, Yenanas Village is surrounded by tall trees and shady bushes. The atmosphere is serene and cool, so it comforts any visitors. Lots of coconut trees grow either in the village or near to the homestay. The houses look traditional and old. However, they emit a majestic aura. When it comes to the homestay, it is located in the east part of the settlement. It consists of several bungalows with good facilities, as well. What about people of Yenanas? Well, they are quite curious to tourists but friendly.

Exploring Yenanas Village
The best thing to do in the village is to enjoy local foods and drinks. Visitors can enjoy those refreshments while witnessing sea scenery. It is a good idea, as the sea looks splendid. For those staying in the homestay, they can even get free a cup of tea or coffee, in fact. The thing is they need to rent a bungalow beforehand. As an alternative, visitors can stay in a villager’s house, which is more affordable than renting a room in a nearby homestay.

Next, it is either snorkeling or diving. Both activities are popular among the guests in Yenanas Village, after all. Thanks to the formation of charming corals underwater. As for the tip, visitors should carry their own snorkeling gear! The spots are located near to the homestay, which is clean and safe, even for kids. That means everyone can swim and play in the water safely. The sand of the beach is soft, as well. That means beach walking becomes an option to spend a good vacation in Yenanas.

The next fun activity in such settlement is to witness the sunset, which appears stunning and romantic. So, tourists must head to the beach in the afternoon, before the sun sets. In the next morning, they can witness several nautical creatures in the water including sea turtles. There are even small sharks, which are seen at night! What’s more? The other creatures living near to Yenanas Village are birds of paradise and “kuskus”. They are a perfect object for photography, after all.

How to Get There
Batanta Island is quite accessible, especially from Waisai City. First, travelers must take an airplane and the destination is Marinda Airport. From such location, they need to reach Waisai Port and rent a speedboat to Batanta Island. A longboat is also available for tourists, which is considered a cheaper option. However, it takes longer than a speedboat. Once they reach Batanta, the next destination is Yenanas Village, which is located in Selat Sagawin District.