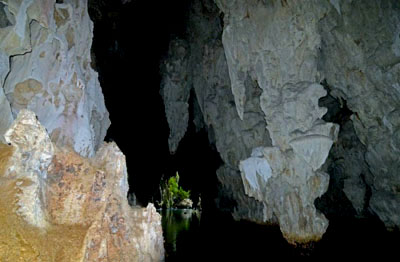 Misool Island is known as a recommended tourist spot in Raja Ampat Regency, as it features stunning karsts and lagoons. Apart from those lures, it also becomes the home of Tomolo Cave. It is also known as Tengkorak Cave or “Goa Keramat”. Tourists recognize it as the spot for caving and sightseeing. The fact is that some archeologists often come to the location to study the nature. Some birds of paradise even live in the location and it features a lush forest. That means the cave is suitable for a small adventure and exploration. Some tour agents even include it in the best list of Raja Ampat tourism.

The Nuance
The locals call it “Goa Keramat”, which means the sacred cave of Misool. No wonder, it emits a creepy sensation and dark atmosphere. Despite such fact, no one is afraid of entering it! Due to the presence of water in front of the cave, visitors would get wet when going in. The size of the cave mouth is not quite big, and it is covered by some bushes. Not to mention numerous rocks surround this location. The atmosphere is calm and the nuance is serene. Apart from pilgrimage, tourists come to the cave to find peace. Thanks to its tranquil weather. The rejuvenating air is also comfortable.

Exploring Tomolo Cave
What is the most interesting thing about the cave? According to the locals, there was an Islam propagator in Misool Island. It is said the cave holds the tombstone of such person. That means Tomolo Cave becomes the destination for a pilgrimage, especially for those looking for blessings. Not to mention the cave is located near to the sea, which can be reached using a boat. The calm water even makes it more serene and mystical. Due to this reason, some locals consider it a sacred place instead of a tourist spot regardless the increasing number of visitors.

The mouth of the cave looks majestic and magical! The rumor has it. Some visitors often heard a mysterious sound of people playing tambourines. According to them, the sound came from different spots. No one knows the source of such mystical sound, though. This story is often told by both locals and tour guides. It also becomes a reason why tourists come to the cave, after all. Due to its sacredness, no one should act carelessly when exploring the cave.

Visitors come to Tomolo Cave with different reasons. In fact, some of them want to spend a night in the cave. They are looking for both inspirations and blessings, as the cave is considered holy. No wonder, people in Misool Island take a good care of it, especially those who belong to Matbat Tribe. For tourists, the cave is a unique option of a vacation destination. Despite the remote location, it offers historical and beautiful value to visitors.

How to Get There
It takes an effort to reach the cave. For outsiders, an airplane is required to reach Sorong City. There is an airport, called Domine Eduard Osok and it becomes the first checkpoint. Next, they should head to Sorong Port and rent a speedboat to Misool Island. Once they reach the location, it is time to take a small boat to reach the cave. The whole trip is fun, for sure.