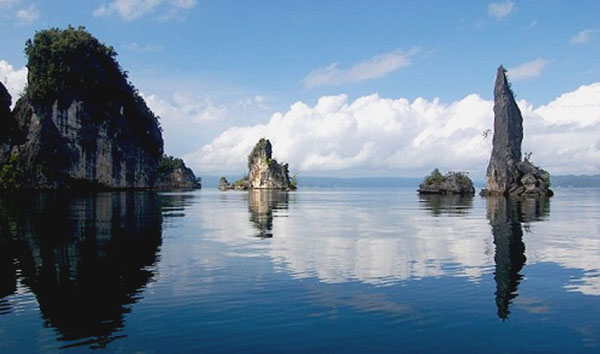 Many vacation destinations are available in Raja Ampat Regency. One of them is Pencil Island, which is located in Kabui Cape. The problem is no one can get on the island, as it has no land. Pensil means “pencil”, so the shape is similar to such item. It is made of coral reefs and hard stones, after all. Due to its unique shape, many photographers often come to the island and capture a great picture of it. The location is in the midst of Kabui Cape, so it takes a little bit effort to reach it.

The Nuance
In terms of size, Pensil Island is small but tall. According to the locals, the age is more than a thousand year. There is no pier nor seashore, so boats can’t approach the island. Despite the inaccessibility, visitors have an opportunity to get closer to the island and take a picture using their camera. The sea nuance is quite comfortable, after all. Not to mention the atmosphere is rejuvenating. Apart from that, the wind is warm and soothing. It is a good experience, spending times on a boat and witnessing Pensil Island from near.

Exploring Pensil Island
Pensil Island is part of Kabui Cape, but it becomes the prime attraction there. According to the locals, it is even included in the list of World’s Geopark Site. That means the government puts a special attention to such island, and it becomes one of the best tourist attractions in Raja Ampat. Only the locals and tour guides know the route to reach the island, so tourists should have got such service prior to exploring Kabui. It is also because the cape appears like a labyrinth, which may confuse visitors.

Photography and sightseeing become the primary fun activities in Pensil Island. Due to this reason, all tourists should carry a camera. As an alternative, a smartphone is a good idea. Importantly, tourists must visit the island during a good weather, where there is no rain. When it comes to visibility, the best time to visit is at noon. The island appears plainly with its stunning shape. The coral reefs are covered by some green plants. They look so beautiful!

What’s next? It is time to visit other parts of Kabui Cape, which emit a mystical aura. There are even skulls, scattered in several caves of the island. For those who love an adventure, those caves would be a recommended site to explore. It is part of a vacation in Pensil Island, after all. What travelers need are some money and a good tour service. This way, everyone can enjoy the trip in comfort.

How to Get There
From Jakarta, the first destination is Waisai City. The most recommended transportation is definitely an airplane and the destination is Marinda Airport. Next, it is time to visit Waisai Port and ride a speedboat to Kabui Cape. Pencil Island is located in the middle of it. As mentioned before, it is better to take a tour service in visiting that location.