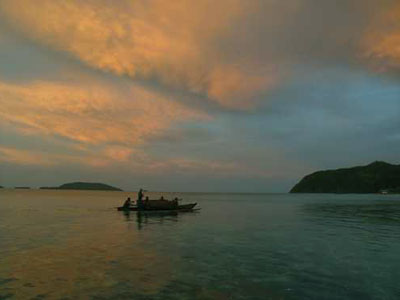 In West Papua Province, Raja Ampat becomes the prime lure to attract visitors. Such stunning archipelago offers different types of beauty to tourists, including majestic islands and adorable natural attractions. For example, there is Gam Island with its numerous lures. One of them is Yenwaupor Village, which becomes recommended culture tourism in Raja Ampat.  It belongs to Meos Mansar District and the location is in the south part of Gam Island, so it is quite reachable. On top of that, it provides lots of interesting things to tourists.

The Nuance
Like other villages in Raja Ampat, Yenwaupor has some natural features. These include crystal clear water and white sand beach. Near to the coast, there is even a pier with some gazebos. The location becomes quite popular, especially for those who love water sports. No wonder, most visitors would go either swimming or snorkeling there. Next, there is a formation of coconut trees in the beach. Some traditional structures are also available there such as houses, a small mosque, eateries, etc.

Exploring Yenwaupor Village
The best thing about Yenwaupor Village is its accessibility, as the location can be reached from any ports. Once tourists get in the village, they can do many things. As for reference, birdwatching is recommended. The fact is that some birds of paradise live near to the village. It is on the nearby hill, on which tourists can visit. However, it takes some time to reach the location. Not to mention the landscape is a little bit challenging. In this case, carrying a map or hiring a tour agent becomes a good idea.

Trekking becomes an important tourist activity in Yenwaupor Village. It is because the presence of a hill, which is located near to the local settlement. It takes both energy and time to reach the top of the hill, but the effort is rewarding. That’s the habitat of local’s famous birds, Cendrawasih, after all. Tourists would be amazed by such stunning birds, as those animals might dance on the branches of the trees. Their shape and color are indeed mesmerizing! This explains why those birds become a suitable object for photography.

Apart from sightseeing, Yenwaupor Village is suitable for enjoying snorkeling. It is because the water offers a good visibility and numerous types of fishes. The water is calm, so everyone would be able to explore it, even for beginners. As an alternative, visitors can learn some local culture by approaching the villages. Some kids are also seen in the location, playing and running around. Due to their openness, they even approach tourists without doubts.

How to Get There
Yenwaupnor Village is considered easy to reach, as tourists can either come from Waisai Port or Sorong Port. The village resides in Gam Island, after all. That means any people can simply head to the island using a speedboat from those ports. The only thing that matters is the schedule of the speedboat service, which is quite tight on holidays.