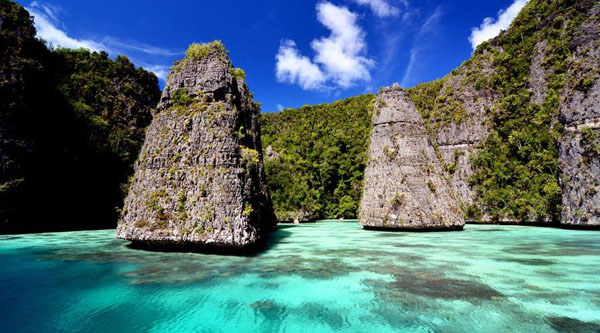 Raja Ampat Regency is famous among tourists, as it holds tons of beautiful nature and islands. One of the most visited islands is called Misool and it is the home of Sumalelen and Sumbayo Cliff. The location is near to the lagoon and it is considered a perfect spot for sightseeing. The fact is that the cliff holds a historical value. Tourists can approach it by boat from the nearby port, actually. Both the cliff is similar and they were formed naturally due to the effect of the waves. What a great object for photography!

The Nuance
In the midst of seawater, Sumalelen and Sumbayo Cliff reside. They have a similar shape and height, actually. A unique part is the bottom of those cliffs, which appear floating from afar. No wonder, they attract photographers due to such uniqueness. Next, the cliffs are located on the prestine water with crystal blue color. The waves are calm, so any boats can get closer to the location easily. In the back, a lush hill covers the cliff majestically. It also becomes a good object for photography, after all.

Exploring Sumalelen and Sumbayo Cliff
Both the cliff is located near to each other, so tourists can get closer to them easily. The most popular activity to do is definitely sightseeing. From the boat, visitors are allowed to observe and enjoy the beauty of those cliffs. The water is calm, after all. That means the boat can get around without hassles. At noon, the cliff appears plainly, so it is considered the best time to visit the location. Despite the heat of the sun, it is a worthy tour.

The next activity is photography. All parts of the cliff are worth a photo shoot, indeed. People can even take selfies in front of the objects. As for the tip, it is better to use the right camera. An expensive camera may produce the best pictures, after all. Also, don’t come during bad weather. The rain or other issues may prevent people from producing good pictures. Due to this reason, tourists should learn the weather first prior to reaching Sumalelen and Sumbayo Cliff.

Once they have explored the cliff, it is time to visit nearby tourist spot. The most popular one is the hand-painted cliff. As the name suggests, the wall of the cliff has some old paintings on it. It is said those paintings were made by ancient people. In terms of age, it is more than 10,000 years! With all these attractions, it will be a waste for not coming to Sumalelen and Sumbayo Cliff when spending a holiday in Misool Island.

How to Get There
In order to approach the cliffs, travelers should head to Sorong City first. An airplane is the best option of transportation service, actually. Next, they need to rent a speedboat to Misool Island, where the cliffs are located. Another trip by boat is required to reach the exact location of such tourist attraction. It takes some time, but it is worth the effort.