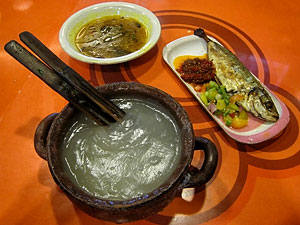 The original people of West Papua works usually as fishermen and traditional farmers. Most of them still lead the traditional life, eat traditional food which is prepared in the traditional way. The staple foods in Papua are rice, sago, taro roots and kau kau which are generally prepared with seafood, chicken, Pork and a large variety of greens. Coconut is used in cooking, for example, taro leaves cooked in coconut cream. Fish and other seafood supplement the diet and chickens are kept. A whole pig is roasted for traditional feasts. The few dishes are such Mumu, Chicken Barapen and Papeda.

Mumu is a traditional dish, named after the oven where they cook their dishes; combining pork, sweet potatoes, rice and greens. It is cooked in the ground over hot rocks. Chicken Barapen ala Walesi is one of the most famous Papuan foods. Walesi is a name of tribe in Wamena Papua. They change pork with chicken because many Wamena people are Moslem.

Another traditional food is Papeda, made from sago flour base. This food is very popular for coastal communities or low-lying areas. To make it relatively easy, simply by pouring hot water into the sago flour, stirring it repeatedly until thickened and has a glue-like appearance. Enjoying papeda with yellow spice or sour fish dishes or the other plus the hot chili will taste very good. There is also traditional drink such as Saguer, a kind of 'MILO' (local drink) alcohol that is processed from virgin coconut.