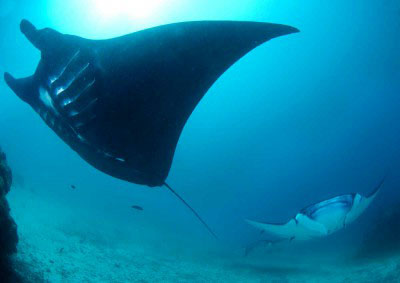 Raja Ampat Archipelago is a new piece of heaven, which is located in Indonesia. As the name implies, such region consists of numerous islands and the biggest one is called Waigeo. The question is what people can do there. Consisting of numerous types of karsts and beautiful seawater, the island provides unlimited options for vacation spots. As for reference, tourists can enjoy a nautical observation in the sea, as there is an appealing attraction such as manta rays. The local government has conducted a significant effort to retain the number of such creatures. Today, tourists can even observe them directly underwater.

The Nuance
Manta Rays live abundantly in the sea near to either Waigeo or Arborek Island. Their size is enormous and their wings spread beautifully. Only professional divers are allowed to get near to this majestic creature, though. Have no worries. Any beginners can also approach it, using the help of a diving instructor. The crystal clear seawater even helps them to observe the creature plainly. Thanks to the stunning nautical environment of Raja Ampat.

Exploring Manta Point
Witnessing manta rays from near becomes a new experience for everyone. This explains why many divers are interested in visiting Waigeo Island. The fact is that the island also becomes a perfect spot to witness such creature. According to the locals, the name of the location is Manta Point and it resides near to Arborek Village. For divers, the best time to get in the water is either in the morning or afternoon. It is because the creature appears mostly in those times. Otherwise, it is difficult to approach them.

Even though Raja Ampat Regency has several Manta Points, Waigeo Island becomes the most recommended one. Arborek Island is also famous for its Mantas, actually. That means tourists have two primary destinations when it comes to observing giant Mantas. With a proper instruction from the expert, everyone has the chance to swim along with the creature and take some pictures of them using an underwater camera. Despite their scary appearance, the Mantas are considered tame and harmless, as long as divers don’t get too close to them.

The sea near to Waigeo and Arborek Island becomes a perfect habitat for such creature, as an abundant number of planktons is available there. It is true many locals live as a fisherman, but they have never caused harms to such creature. That means hunting manta rays is considered taboo among people in Raja Ampat. This explains why the number of such giant fish keeps increasing over time and attracts more tourists to observe them.

How to Get There
Two checkpoints are available in reaching Waigeo Island. First, tourists can take an airplane to Marinda Aiport in Waisai City. As an alternative, they can take the same type of transportation service to Domine Eduard Osok Airport, which is located in Sorong City. From there, their next destination is nearby beach or sea near to Arborek to start witnessing majestic manta rays!