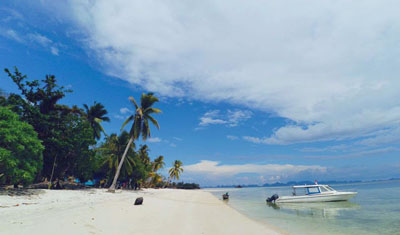 A vacation in Raja Ampat Regency has been quite popular these days, especially for those who love nature. Such region offers a formation of islands, which are quite tempting for adventurers. One of the best islands to visit is Kofiau. The locals also call it Wallo Island. It is famous for its sea giants called orcas. That means tourists would visit the island for its nautical attraction. Those killer whales are often seen in their habitat, and tourists have an opportunity to witness them all.

The Nuance
The island is covered by lush trees and some wild plants. In the shoreline, tourists can enjoy crystal clear water with its stunning corals. That means snorkeling is quite recommended there. The beach features white and soft sand, so people can walk on it without hassles. Some boats are also seen in the seashore. They await tourists to explore the wild sea and witness sea creatures, including whales and orcas. Sometimes, those majestic creatures jump off the water and make a big splash. It is an interesting nature sight!

Exploring Kofiau Island
The best time to visit Kofiau Island is in summer, as the weather is nice. It is between June and September. Not to mention the rainfall is quite low, so travelers can explore the sea in comfort. It is true the island is famous for its orcas, but it also holds other attractions. For example, it is popular for its history and beaches. No wonder, some people come to the island to enjoy snorkeling and diving. It is said the water has excellent visibility and warm. What a great environment to go diving!

For those who want to witness orcas, the best time is in May. These exotic animals won’t harm anyone, as long as observers don’t get too near to them. The size is gigantic and they often jump off the sea. The only precaution is the splash of the water, which is considered big.  In order to observe those creatures safely, people only need to find the right tour agency. This service helps everyone to get near to the orcas with minimum risk. Not to mention they offer the best boat to tourists.

Apart from orcas, other beautiful sea creatures are also seen there. These include dolphins and humpback whales. The best spot to witness these animals is in Tanjung Lampu! Have no worries. Tourists can take advantage of a tour package, which brings them to the best spots to witness those animals. As for the tips, it is better to carry a camera and some money. No one wants to miss an opportunity to capture those superb creatures.

How to Get There
The first destination is Sorong City (Eduard Airport). From there, travelers may continue the trip to Sorong Port and take a speedboat to Kofiau Island. Despite the long voyage, it is indeed rewarding. It is because no other locations are available to see orcas, dolphins, and humpback whales directly in their habitat. That means it is a worthy trip for everyone.

Where to Stay
Hotels are available in Sorong City